A PERMIT approved mixed-use development site in the heart of North Melbourne has sold for $2.908M under the hammer on site this week at 339 Queensbury Street, North Melbourne.

The 362sq. m plot offered buyers a mix of residential and commercial uses including office and restaurant, and had four bidders battling it out on the day.

Ray White Commercial Glen Waverley managing director Ryan Trickey said there was strong interest throughout the campaign given the approvals were already in place.

“It’s rare a piece of land in this area is available with plans and permits approved, stamped, and ready for potential buyers to build on,” Mr Trickey said.

“Competition was hot throughout the auction with four different bidders placing more than 100 bids9:21 AM 7/09/2018between them in the hope of securing the offering.

“It gives great confidence that there’s still a desire in the boutique development space with people wanting to build.

“We’re pleased the plot attracted the attention it deserved and the lucky bidder was a local investor who has activity in the space already.”

Mr Trickey said the combined development opportunity and location meant it was too good an opportunity for developers to pass up. 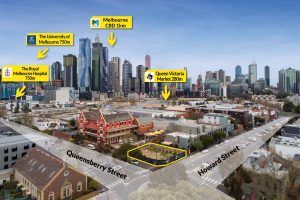 “The development includes 12 apartments, accompanied by restaurant and retail spaces so it has everything an investor could hope for, all within 1km of the CBD,” he said.

“Not only that, the plot also boasts dual street frontages with laneway access offering uninterrupted profile to the north and west.

“Sought after amenities including Queen Victoria market, Melbourne University and The Royal Melbourne Hospital are all within walking distance and the plot is right in the heart of some of Melbourne’s best entertainment and dining precincts.”

Former medical centre in Scoresby sells off market for $3.45m after targeted campaign

Back to all news
Up to Date